I’m still building my colored pencil collection so we are sticking with the blues. I don’t know why I’m doing more Pokémon. I guess I like how simple they are and how it is to make subtle changes to make them even cuter. I am still playing Pokémon GO so seeing them everyday probably has something to do with it. 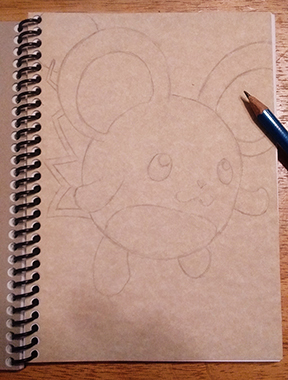 Speaking of Pokémon Go, my nephew was confirmed this last weekend so we went on a little road trip to see him. As a surprise my brother-in-law took us to see a play. Being a surprise we didn’t know what to expect. It was a musical based on “Finding Neverland.” It was wonderful. The cast was great. The production was spot on. It has been a long time since I’ve seen a well produced play so the use of screens and moving images in the background was a bit of a surprise.

The kids in the performance were amazing. I don’t know exactly what I was expecting but their performances and execution was spectacular. I guess when I heard, “Finding Neverland” I was expecting a local theatre company made up of people who were looking for something to fill their weekends, but this was a well polished touring company. All I could think about was what those kids’ lives must be like. They had a devotion to their craft that I don’t think I’ve ever experienced in my own life. Their performances rose above the level of talent. You could tell they had spent hours honing their performances. My daughter does gymnastics and there is a quote on the wall that I captured my attention. I reads, “Don’t practice until you get it right… Practice until you can’t get it wrong.” These kids clearly practiced until they could not get it wrong.

Seeing younger people perform so well really accentuates what good art can accomplish. We often expect more from adults. While an adult might be amazing at an activity we can easily think, “well if I spent 30ish years doing that, I’d be able to do that too,” but when a child accomplishes something just as impressive it adds to our sense of wonder.

I take back what I wrote before, I do have that kind of dedication. It is for my family. My kids help me find the wonder in the world even when I sometimes forget to notice it. An example I have told many people is when we went on our first vacation to Florida with my oldest daughter. In the Orlando Airport there is a water fountain. The fountain is unique in that it doesn’t have a wall surrounding it. It is basically water shooting up in the middle of a big room. I’ve been through the airport dozens of times. It is practically invisible to me, but my daughter lost her mind. She thought it was the craziest, most wonderful thing she had ever seen. Taking her to Disney World was like going for my first time too.