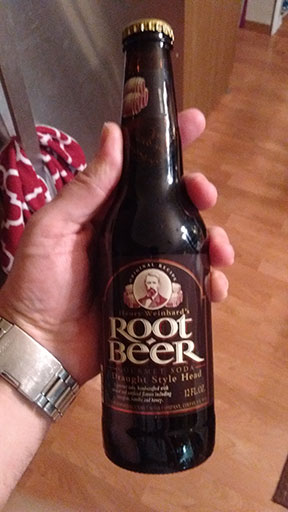 When I started college, I was working at a big department store in their shoe department. I worked really early hours starting around 3am. I had several radios positioned throughout the stock room all tuned to the local indy station. 3am wasn’t the busiest time for the DJs so I would often call in and they would play my requests. I would win free tickets to shows almost weekly until they put a rule in place saying you could only win once a month.

Those were the early days of craft breweries. One local brewery that made a hard push was Henry Weinhard’s. Henry Weinhard’s had a Red Lager. I was not of age but even then the independent nature of the brewery appealed to me. They expanded their advertising to include a Root Beer. The root beer was from the days of prohibition. Weinhard’s started brewing it to keep the brewery from going under. Being that Weinhart’s was a brewery the only way to buy it was by going to your local liquor store. The advertisements even mentioned this fact.

I begged and pleaded with my mother to take me to the liquor store so I could get some of the root beer. She reluctantly did and I was able to get the locally brewed root beer. It was good root beer too. I would make the best root beer floats using it and vanilla Hagen Das ice cream.

Cut to now. As I mentioned, you could only get this micro-root beer in liquor stores because it was brewed by a small local Minnesota brewery. I was in the soda section of my grocery store and there it was on the shelf. I grabbed a six-pack and ventured back to the frozen foods for some ice cream. It was just as good as I had remembered. That got me thinking. If I was able to get the root beer, maybe I could finally try Weinhard’s Red. I went straight to the internet and the results were a little surprising. I remember hearing hundreds of ads about this small Minnesota brewery. It was independent and a family tradition passed down through the generations.

Weinhard’s is located in Portland, Oregon. It always has been. It was founded in the 1800’s but now it is owned by Miller. The fact that it is from Oregon isn’t what bothers me. It is the fact that I am so sure that the advertising said it was from Minnesota. I even did some searching to see if maybe it was just something that sounded like “Weinhard’s” but I was able to find old reviews of Weinhard’s Red confirming that it was a real thing. Memory can be faulty. Eyewitnesses are often unreliable, but this just seemed so jarring. It is almost like recounting an old childhood memory only to find out that it was only a dream.