I have established that I like beer. I mentioned last year that I gave in and tried some seasonal pumpkin beers. That didn’t turn out too bad. There were a few that were, to quote “Supercalifragilisticexpialidocious,” “quite atrocious,” but most weren’t too bad.

Now that a new season is upon us, I’ve decided to start tasting the seasonals. I fell in love with a seasonal beer along time ago and had my heart broken. It was an Irish stout called Snake Chaser. I would look for it every St. Patrick’s Day and every year it would be in fewer and fewer stores. Now I own a pint glass for a beer that no longer exists. I’ve tried to find a replacement but none have filled that particular hole. Since then I tend to stick to things that are more reliable, but sometimes variety is nice. Now that the Spring seasonals are coming out I thought I’d give some a try. If nothing else I might find something to look forward to next year when those cold wintery days are at their soul crushing peak. Here we have Maibocks.

Maibocks originate from Germany, I know shocking. They were originally brewed in the town of Einbeck which apparently is pronounced “Ein Bock” which translates as “Billy Goat.” Why is that important? Well the first thing you notice when perusing Maibocks is that most of them have a goat on the label, and there is never an explanation. Capital Brewery, out of Madison, Wisconsin, has a guy riding a big ‘ol billy goat and my daughter cracks up every time she sees it.

It is believed that Maibocks were brewed during the spring because of lent. Friars and monks would drink it during fasts, which with its slightly higher alcohol content (6.5%-8%) must have made lent a bit nicer. This was used as a substitute for bread? I wonder if my boss will accept that explanation if I have a beer or two at lunch. “What? It’s lent!” 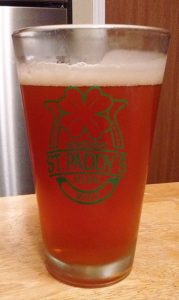 Maibocks have a nice golden hue. I found the ones I liked most were a bit darker. They have a medium/light body that lends itself to drinkability. One of the things that I like about them is the carbonation. They have a higher carbonation which I find refreshing. I really like dark beers but they often seem flat. Maibocks have a slightly “spicy” side that I cannot tell if is due to the ingredients or the higher carbonation. They are a little sweet, but it isn’t an overwhelming sweetness. The hops add a bitterness that nicely balances out the sweetness. Now that I think about it, the sweetness is probably due to the higher alcohol content.

Look I’ll be honest that last paragraph might just be alot of over-pretentious rambling but I’m just trying to say, “Maibocks are really good.” Obviously some are better than others but what I found interesting was how noticeable the breweries influence was on the beer. I have tried close to a dozen different breweries’ Maibocks and because the taste isn’t too overwhelming I was able to notice characteristics unique to each brewery. For example, I have never been a huge fan of Sprecher Brewery, here in Milwaukee. I like their Amber well enough but I’ve always found that there is a unique taste, almost an after taste, that exists in all their beers. Over the summer I drank more than a few Sprecher Ambers so I got used to that taste and kind of forgot about it. When drinking their Maibock, that aftertaste became too overwhelming to me. I noticed that Capital Brewing also had a distinct taste. I didn’t mind their distinct taste, but it was noticeable. Of all the Maibocks I’ve tried my favorite is Rogue’s Dead Guy Ale. Lakefront Brewery has a good one too, but Dead Guy Ale has been my favorite. One nice thing about it having such high carbonation is I can buy the big bottle and split it with my wife while we relax after the kids are in bed.

Maibocks are a nice thing to look forward to every spring and with the proliferation throughout the countries breweries there should be many Maibock Springs to come.