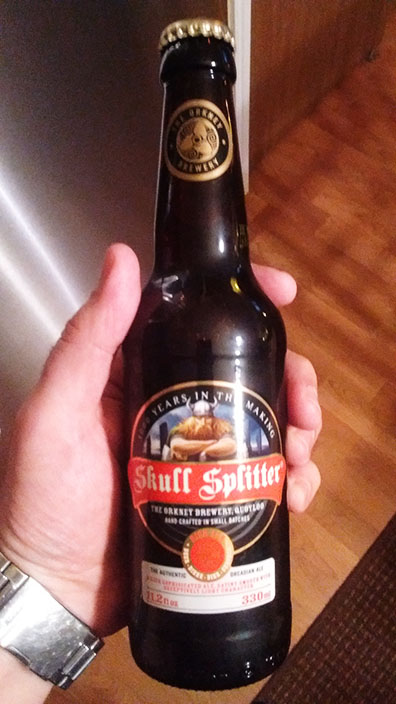 Just look at that beauty. I have discovered a new cooler at my local liquor store. I primarily focus on micro-brews and specifically Wisconsin micro-brews but the cooler I’ve been exploring lately has imports. Honestly, I don’t know enough about import beers. I’ve heard rumors that there are no “true” import beers in America. There are foreign recipes that are then brewed here which is why our Guinness doesn’t taste like the real thing, but that could be totally wrong…
…OK, I’m back. Just did some fruitless research and I still know no more about importing beer. Anyway, this new cooler has some interesting new options. I was going to a friend’s house for an evening of drinking and Dungeons & Dragons so when I saw this I knew it just had to be.
All-in-all it wasn’t bad. The alcohol content was pretty high so it was a little sweet. It reminded me of a lighter version of a bourbon barrel aged amber but with a bit less body. The mouth feel was a little lacking which is something I’ve noticed about a few different imports I’ve tried. Wow, “mouth-feel?” Yeesh, that was one of the most pretentious things I’ve put on this blog. Nevertheless it was good and given the context it added a bit more fun to the evening.
And incase you were wondering I play a half-orc barbarian named Grog. He is incredibly jovial but not very bright.
Milwaukee’s Best Printer
High-Quality On Demand Printing