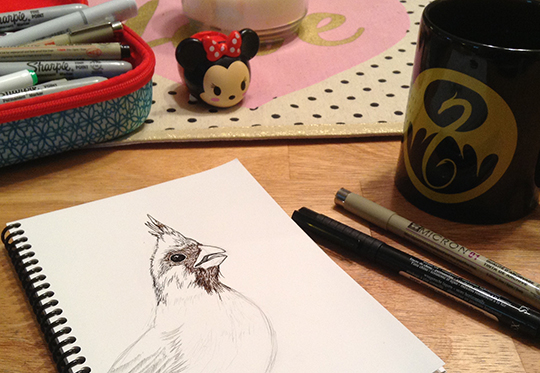 Every once in a while the stars align and I get a Saturday morning to draw. The girls were content with their over-sized cinnamon rolls and new animated feature so I was able to scribble out a quick sketch. We were at the Zoo the other day and they had a new cardinal. It was a little grey guy the likes of which I had never seen. It is smaller and more angular than the typical cardinal. I couldn’t remember what kind it was or where it was from but while trying to find it I did find some neat pictures of grey cardinals. 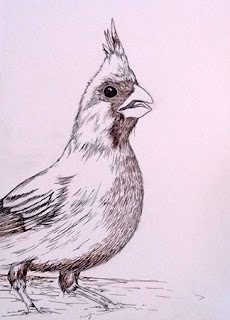 While in school I took a technical illustration class. It was a good experience because it helped me develop my observation skills. Just taking the time to focus on every detail of the subject. Trying to figure out what makes it unique before even starting to draw. I had a professor who would talk about how labeling things makes us lazy. When you look at a chair, you just see “chair” but not every chair is the same. By calling it a chair and moving on you are ignoring everything that makes that chair unique. The material the chair is made of, the angle of the seat or even the chip that is knocked out of the wood on the back leg. Of course if we viewed the whole world in this fashion we would be crippled, unable to get out of bed in the morning because we would be counting the threads in the bed spread.

Sometimes it doesn’t hurt to take that time though. That cardinal fascinated me so I spent 10 minutes, as long as the kids would allow, just looking at it. The way its feathers were angled, the unique coloring of its breast feathers and its crest feathers. It was awe-inspiring and even though I probably will not have time to spend looking at it every time I go to the zoo, I do have the memory of it and my future brief viewing will be richer because of it.