Home » #PokemonGO » Starting with some swirls… 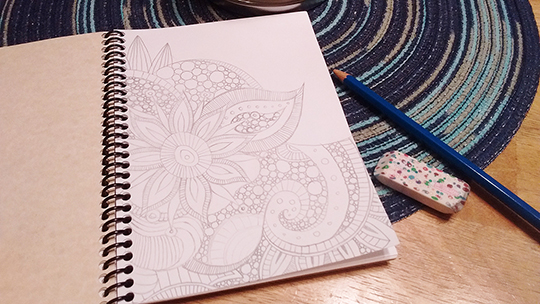 Man have I been busy! You can tell I mean it because I very rarely use exclamation points. Work is crazy. You will notice from here on out the links will no longer appear at the bottom of posts. One of the companies I was linking has closed. It is rather disappointing because I built the company’s web presence from nothing to being the first unpaid google result for Milwaukee printers.
Alas, we move on. Work isn’t the only thing that has been crazy. I took my nephew to a Pokémon tournament this last weekend. He is the nephew that inspired me to start Pokémon GO. We talk about Pokémon and he mentioned a long time ago the desire to go to a tournament. This year a tournament was held in Madison, WI so I agreed to take him.
I have been to a few Cons so it was pretty much what I was expecting. He had a blast. The competition was far stronger than he anticipated so he didn’t farewell. He didn’t win a single round but he had very high spirits. He is already planning his strategy for next year.
There were two sides to the competition. You could either compete using a DS through the video game or you could play the card game. I really enjoyed watching the card players. The group was amazingly diverse. There was a big burly guy with arms covered in tats and a bushy unkempt beard. He was playing a young kid, maybe a sophmore in highschool, whose appearance could quickly be summarized with the term “nerd”. The kid was nervous and irritated and clearly not playing well. The kid played a card and I immediately could tell he made a mistake. The kid’s eyes started to well with tears and then the big dude leaned forward and said, “Hey man, we’re here to have fun. Don’t sweat it.” He picked up the kids card and handed it back to him. “Take your time. We aren’t in a rush, OK? Think about what you want to do before you do it.” He then smiled and leaned back in his chair. It was an oddly intimate moment. I had to walk away because I felt a little guilty for witnessing it. I’m pretty sure the big guy won in the end, but I saw the kid smiling before their game was over. 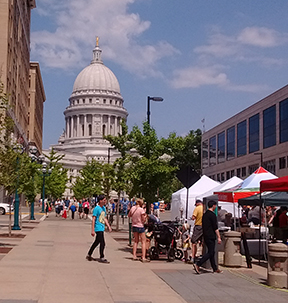 There were a few more things along those lines that I saw. My nephew even said one of his opponents offered him some advice and tips for next time. It was fun spending time with my nephew. It was also a little boring waiting around while he was competing but for me boredom is a luxury I am not often afforded.

I took advantage of my time by exploring. I walked outside the convention center and there was the capital building. I didn’t grow up in Wisconsin so I never went there for school or anything like that, so seeing it was pretty neat. To top it all off there was a dairy festival. You can’t see it very well in the picture but there were actual cows in the first tent on the right. It could not have been more stereotypically Wisconsin. I got my 25¢ cup of cold milk and strolled the festival.