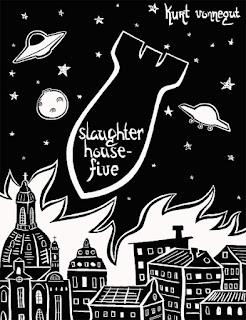 Here we go with another post about things I should have done long before I actually did. I suppose waiting on Kurt Vonnegut isn’t quite as bad as To Kill a Mockingbird or some of the others I’ve been catching up on, but I wish I had read it sooner.

Slaughterhouse Five was put into my head by the movie “Footloose”. I’m pretty sure it was “Footloose.” It was a throwaway joke about how cultured the big city boy was. Just the name of the book captured my imagination. I somehow mingled it with the Chicago Seven. I Assumed it had something to do with an incident involving 5 African-American kids and a slaughterhouse. I created a plot that now sounds much like the plot of To Kill a Mockingbird but with the children on trial.

My brother-in-law likes reading classic books. We talk about books with one another and I appreciate hearing his insight. I had mentioned a comic book I like about a man who was abducted by aliens. The aliens put his mind into a golem of sorts. The aliens are never seen or heard from again, at least to my knowledge, and the book is all about him coming to terms with his new situation. The comic is called Concrete. He listened while I vaguely described the plot and then he mentioned Slaughterhouse Five.  He then gave me a vague plot description and my interest was piqued again.

The last few books I’ve read have been Sci-fi or horror related. Redshirts: A Novel with Three Codas was the last book I read. I enjoyed it but wasn’t totally blown away. I can now see many similarities between the books but I was so taken by Slaughterhouse Five that I am seeing echoes of it in everything.

I absolutely loved the book. I enjoyed the relaxed nature of how it was written, so it goes, with its constant asides and digressions. The way it would interject facts, that might or might not be true, enriched the story without being too distracting. It took the opposite approach of the novel Ready Player One. Ready Player One made endless references to pop culture and history, but they were purely for nostalgic reasons. Vonnegut was able to intertwine references needed to propel the story and add weight in a way that wasn’t intrusive. Instead of being intrusive it was really building up to a moment involving a barbershop quartet that was absolutely amazing.

I mentioned in previous posts about how much I liked the show “Mr Robot.” This book reminded me of how I loved that show. The book takes the main story and almost buries it underneath the fantastical. When everything comes together the elaborate construction of the story only becomes more complex and intriguing. This is science fiction done right.