I’ve selected a color palette. Still just taking my time. It’s hard not to be disappointed with a lack of progress but that is what I want to focus on with this. That and I’m trying to push what I can do with the blending of grays. I am primarily using a 20% cool grey but then blending it with white to get different levels of gray. Some lighter, some darker. I’m trying to do that with the blues too but not as much. 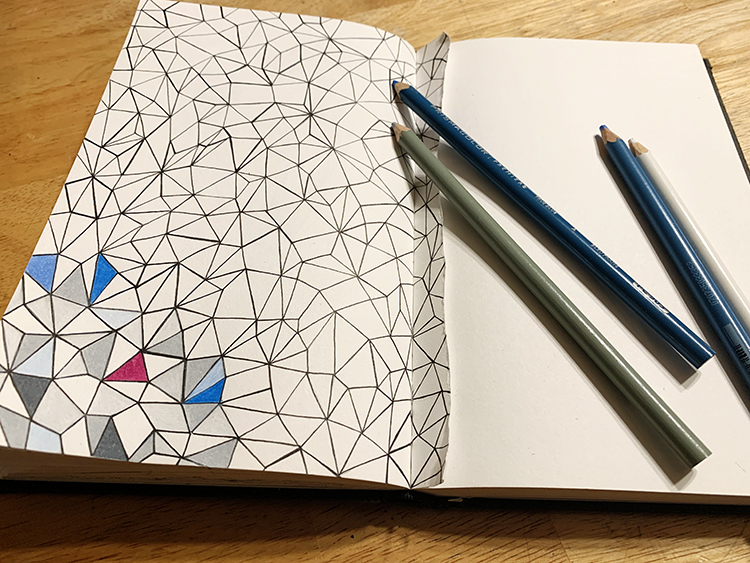 My daughter and I are watching Death Note. She is at the age where even getting her to do something she likes can be a chore. It is ok, I try to use the nights she flakes out on me to do stuff like make enchiladas. So far I’m impressed with Death Note. I heard about it when it came out in 2006 but I was already past my anime phase at that point. I later heard that they made a live action movie of the series which generally means the original was pretty good. There is a tendency to take good or successful anime and turn them into mediocre, or often terrible, movies. It is hard condensing a whole series, potentially hours upon hours of material, and making it a 2 hour feature. Nevertheless, we are about 1/4 of the way through the story and I admit to watching more than drawing at this point. I still haven’t been sold on the series but it is off to a pretty good start. The one thing that is a little hard, even still 10 episodes in, is the fact that the main character is a villain. I don’t mean an anti-hero. He is a full on, megalomaniacal, serial killer. It isn’t a secret either. First episode you realize his intentions are not good. It’s so out of the norm that even while watching an episode last night my daughter turned to me and said, “I can’t believe he did that!”

So I’m still taking it easy. Trying to figure out what I want to do once school gets back in session and life returns to normal. Summers are so chaotic. They aren’t as hard as they used to be but now they are just flying by. It’s going to be over before I know it.