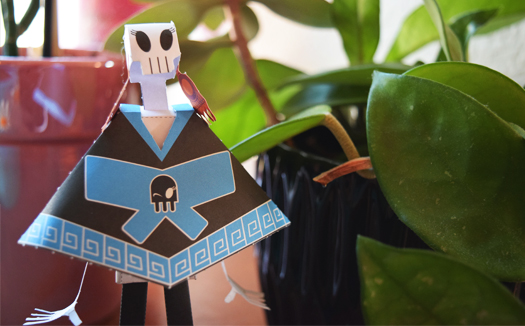 As I mentioned before, we are doing some papercraft. Origami, but not so traditional. I had a phase where I made alot of paper toys. As a joke I once folded 50 chickens, packed them into a box and sent them without a return address. I never heard how they turned out and there was never a news story about suspicious boxes so I can only assume the people who received the boxes full of chickens just stood scratching their heads wondering what exactly was going on. By the way, if you received one of the boxes…SURPRISE! It was a fun thing. Small communities were created on the internet. Artists would collaborate and even release “special” and “limited” editions. I still have a folder on my desktop full of jpgs and pdfs. I made a few of my own designs but I never uploaded them or directly participated in the forums. I was more of a lurker. 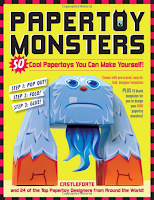 And then I was walking through a bookstore and I saw something that immediately caught my attention. A book that was full of papercraft toys. Pre-perfed, pre-scored (which has got to be the worst thing about DYIing them), just punch out and glue. So I picked it up. My interest in making them was starting to wane so I went through made a few of my favorite designs and put it on a shelf. I pull it out every once in a while but even though they are all ready to go, depending on the complexity of the monster, it can take anywhere from 30 minutes to a couple hours to complete one. I have always loved this book though and while trying to find a link to the book, I was happy to find that there are many more books like it on the market. I’m a little surprised by this because, working in the print industry, I can tell you these books have to cost a ton to produce. Custom dies need to be made for each page to create the scores and perfs, and the intricacy of some of the designs are amazing. I often use an Exacto blade when punching them out to avoid loosing fingers, teeth and tentacles.
Last week, my oldest was stricken by a virus which resulted in a fever in the low hundreds. So she had to stay home, so my wife and I went into crisis-mode. I went into work at 5am and had to get home in time for my wife to make her afternoon meetings. By the time I was home my daughter had napped most of the day and was feeling much better. She wanted to do something, anything, so that time consuming aspect popped into my mind and I pulled the book off the shelf once more.
The header is my monster. My daughter wasn’t as patient so her monster was a little rough. She wouldn’t allow me to take pictures of it. We are having alot of fun doing the papercraft and origami and I keep having memories flood back of when I was her age doing the same things. She has different interests so instead of Chinese Stars she is just making stars. Her bird is a crane, not a mechanized mega-crane of DOOM. This morning we came up with the idea to keep making stars for a couple weeks and then we will use fishing line to hang them from her ceiling. It just occurred to me to look into glow-in-the-dark paint.
Milwaukee’s Best Printing
Online Calendars and soon Holiday Cards