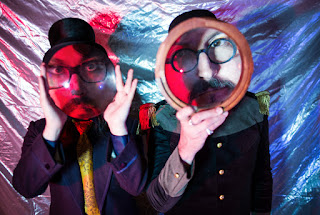 So I’ve been listening to an album all week and I have to say I’m quite impressed. It is The Claypool Lennon Delirium – Monolith of Phobos. It is a collaboration between Les Claypool of Primus and Sean Lennon of Ghost of a Saber Tooth Tiger. I am not familiar with Sean Lennon but I used to listen to Primus quite a bit. The album has a older sound, almost like ’60’s or 70’s psychedelic rock (that’s a thing right?). It is a little silly and a little weird, a lot like Primus, but it is unlike anything I’ve heard lately. If you saw the newer Charlie and the Chocolate Factory, it reminds me a bit of the new Oompa Loompa songs. Which sounds really off-putting but really turns out to be something wonderful. This is not a children’s album. One song is about a boy and his use of prescription pills to treat his depression while another is about a girl who is addicted to Oxycontin and turns to heroin. A little dark I know, but definitely worth checking out.