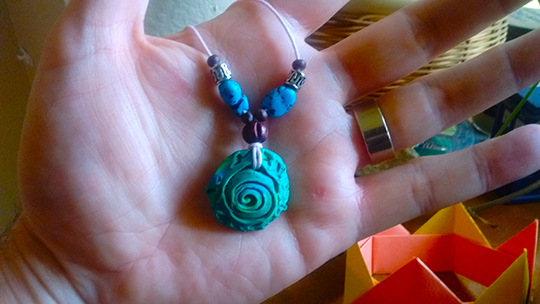 My oldest daughter has been doing little sculptures using Sculpey. I could tell she was losing interest because she was running out of ideas. She was making food with faces kind of like Num Noms. After making several dozen she would get out her sculpture stuff and just sit at the table not really making anything. So I suggested making jewelry. I mentioned in previous posts that we are currently on a Moana kick, so she decided to make Heart of Te Fiti necklaces. Small aside, I just looked up how to spell Te Fiti and up until this very second we all thought it was “Na Fiti.” Anyway, she made some Heart of Te Fiti charms and we baked them so she could make a few necklaces. She has been gifted many necklace and bracelet making kits so finding supplies was not a problem. She also went through her jewelry box finding old bracelets she could cannibalize.

I took the opportunity to talk to her about working in series, which she really took to. She drew a bunch of circles and cut them out, comparing them until she found the size she liked. Then she started mixing greens, blues and yellows until she found the color she liked. She made at least a dozen different hearts, all a little different. After we baked them she made one necklace using some of the beads from her collection and she stopped. I was a little surprised she only wanted to make one necklace but I didn’t say anything and just let her do her thing.

The next day I noticed she was wearing the necklace after she got dressed. When she got home she immediately started picking out beads and strings. She made three more necklaces and took them to school the following day, giving them away to her friends. She hasn’t made any more necklaces yet but she keeps talking about what she wants to do next, drawing pictures and asking for more clay.

I told her I was going to write this post about her necklaces and the first thing she asked was, “Do you think people will buy them?” I told her nobody really reads this but if you are interested in supporting a child’s creative dreams…