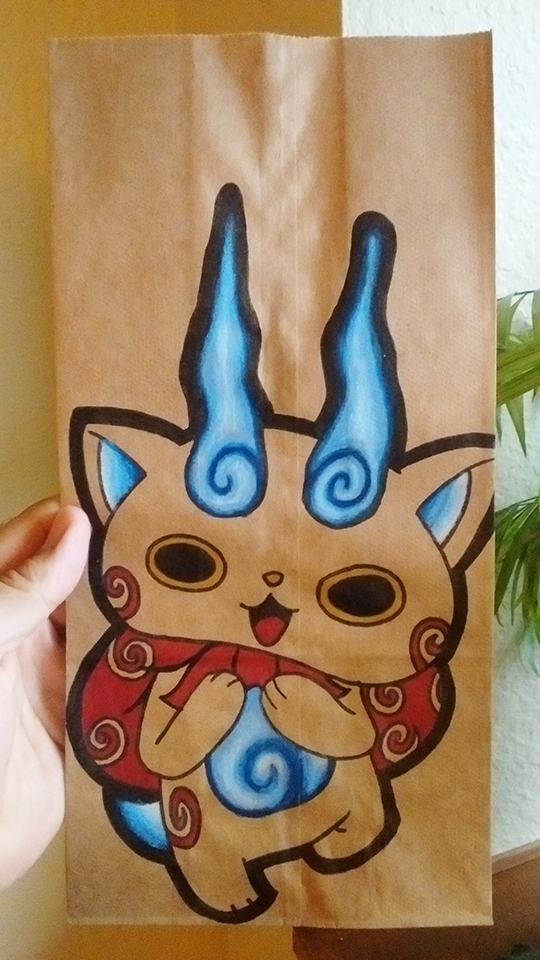 Yo-Kai Watch is the weirdest show. The first episode was all about how the grade school boy was caught by a girl coming out of the school bathroom after dropping a deuce. She then goes and tells everybody in the school, totally embarrassing him. As it turns out it isn’t the girl’s fault, she is just possessed by a spirit or Yo-Kai.

My oldest has started to really like the show and the dollar store has a huge supply of the toys all for a… dollar. A dollar because it is the Dollar Store, nevermind. So this was my daughter’s lunchbag. A couple posts ago I talked about how it was a special thing just for her, well apparently her bags haven’t gone unnoticed. She told me a girl was being really mean to her asking what made her so special. To top it off the girl’s mom was going to make her lunchbag 100 times better…

I feel bad for that poor girl’s mother. Her mom is probably just doing the best she can to get the kids out of the house on time and now she has to learn to draw, buy bags and come up with something to draw on a bag (that is just going to get thrown away anyway, mind you) all because some jerk (that’s me) has too much time on his hands!
Seems like a waste of time to me.
So I have some big news…but it is still a secret. Ok not a secret but it isn’t done yet. I’ve been doing this blog for over a year now. I have been far more dedicated and successful than I expected so as a reward to myself I have launched a website. I am currently trying to copy all the old posts over but because the format is different it is taking a little time. Things might slow down here as I try to catch up and eventually move everything over.