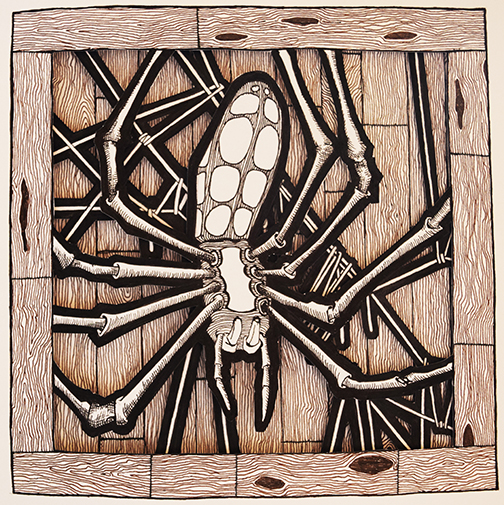 This is the drawing I started over a year ago and set aside. The detail picture above didn’t turn out that well but I think you can see what I did. I have always been obsessed with creating dimension through layers. Maybe it goes back to the old side scrolling parallax of Nintendo games or just something I saw in passing, it is a technique I seem to revisit regularly. 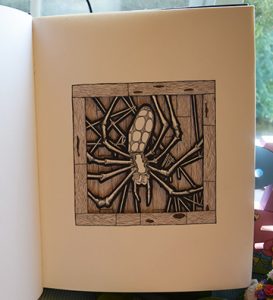 A few years ago I picked up a collected trade paperback of Usagi Yojimbo stories. Stan Sakai is amazing. I have to admit, I learned of Usagi Yojimbo from the Teenage Mutant Ninja Turtles. When I was little I move around alot. Sometimes making friends was hard. Sometimes we wouldn’t live in one place long enough to make friends. So I would skateboard and draw. My older cousin was a huge influence on me. He turned me on to rap music, skateboarding, drawing and comic books. Oh and ninjas.

Right before one of my first major moves, my cousin took me to the comic book store and loaded me up with comic books. Included in those books were the Eleventh printing of Teenage Mutant Ninja Turtles #1, TMNT #2, #4 and #5. He got me some GI Joe and Transformers comics too. Looking back, which I just did last night, I can now see why TMNT was a low point of comic book history. At the time it appealed to me even more. The crude drawings were easy to copy and I quickly picked up the turtles anatomy allowing me to write and illustrate my own stories. I spent alot of time drawing turtles and because of that I developed a love for both illustration and the Teenage Mutant Ninja Turtles. 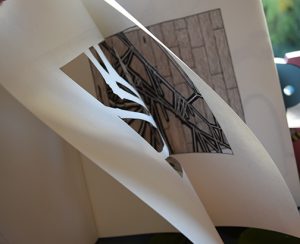 Now my ascetics are firmly in place. I spend alot of time now trying to find the roots of my ascetics so that I can better understand them and develop them further. When I picked up that first volume of Usagi Yojimbo stories it was immediately eye opening. Stan Sakai exemplifies wonderful illustration and story telling to me. His beautiful illustrations are amazing in their complexity while appearing simple. His characters seem rooted in history. Miyamoto Usagi is a ronin, a samurai who’s master was killed due to his failure. Roaming the country he helps others while avenging his fallen master. Sakai weaves historical elements into his tales while also adding small artist flourishes that reference Japanese artwork from the era.

While researching Stan Sakai I ran across some technical illustrations he had done. In all honesty they were not that good. I was surprised at how inaccurate they were. A spider he had drawn had some legs that had four joints while others only had two. That is what started this drawing. I started sketching a spider, but using it as a starting point. Focusing on lines and joints. Technically it is a spider and it functions as a spider but it doesn’t hold up on closer inspection. I then pushed it even further with the line work. Adding to the complexity without regard to accuracy. Then I took that idea and ran with it. Abstraction through imitation. I built up the layers and complexity until it was a finished piece. A sort of meditation with all the line work. It makes me want to do it on a larger scale using plexi-glass and really blowing things out, but in all honesty, that will probably never happen.