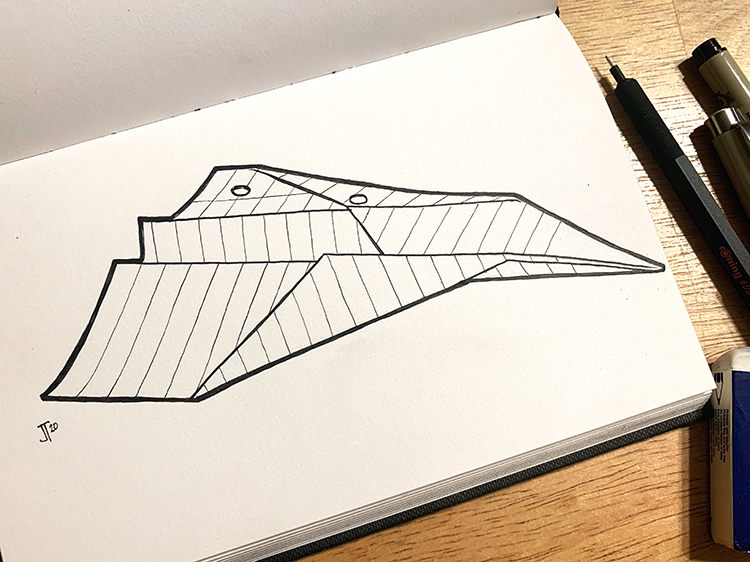 The word “throw” kind of set me back a little. Tomorrow’s word kept me up all night but we will get back to that tomorrow. I thought about drawing a newspaper because one of my favorite video games was Paperboy. Especially at the arcade. The game had those cool BMX handlebars. I spent so much money on that game. I was obsessed with anything that was BMX or skateboard related. I would still love to one day own a 720º cabinet.

Earlier this summer I got an old BMX bike that I started fixing up and working on. It was fun going for bike rides with my girls. Both of them can ride two-wheelers now, without training wheels. That was the big accomplishment of the summer. My youngest is still getting a hang of it. She was just slamming into things about every other day for a while. She did it with such confidence it almost seemed like she was doing it on purpose. She wouldn’t swerve, scream or even flinch. She would just slam into poles, signs and the occasional mailbox. A few skinned knees aside, she survived them all with a mere, “I’m OK!”

Back to the subject at hand. I used to be obsessed with paper airplanes too. I think that’s where my fascination with papercraft really began. One of my mom’s friends was an engineer. He would fold up these elaborate paper planes that didn’t fly for crap but they looked amazing. Most were based on real planes and you could tell exactly what kind of plane they were supposed to be. He drew up some plans for some of the more simple ones but no matter how hard I tried I was never able to pull one off. I was really discouraged but instead of focusing on my failure I went to the library and checked out as many books about origami as I could find. I spent countless summers making swans, cranes and Chinese stars. I even starting designing my own little paper planes but even after years of trying I still couldn’t pull off one of those intricate planes he had given me.

So I decided to draw a paper plane. Get it?

Y o u    t h r o w   a    p a p e r    p l a n e…  I never claimed to be a genius. It is a simple drawing but I am happy with the look of it. I enjoyed focusing on the line work. I’m trying to get away from being too bogged down in perfectly straight lines. I reached for a ruler once I decided I was drawing a paper plane but I was afraid it might become too static and lifeless. I find it feels more personal if the shakey lines are there. If I wanted the line work to be perfect, I’d design it on the computer. I guess that has been a major focus in my life in general lately. Use the correct tools for the correct jobs and use the tools in the most effective way I can.