Another year of Tricks or Treats has passed. We all had a wonderful day. We invite over some family and fiends and spend the day carving pumpkins, drinking pumpkin beer and eating pizza. This year was one of our best. We didn’t have as many people as usual and tried to cut down on some of the other stress. Instead of running and picking up pizza mid-afternoon, we picked up a couple Papa Murphy’s pizzas and made them when we were ready. We weren’t able to make pumpkin seeds but all the kids painted their pumpkins and seeds were in short supply anyway. 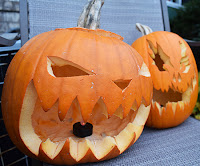 After spending a few hours carving pumpkins and eating pizza we all got dressed-up and went trick or treating. The girls all dressed up as kitty-witches. Not cats and not witches’ cats but black cats that are also witches. My wife went as a black cat, sans witch. I dressed up as Finn the Human from Adventure Time. We all went out into the chilly, but very nice for Halloween in Wisconsin, night. We all had a blast. If you are not familiar with Adventure Time, Finn is a human boy in a strange land inhabited by monsters and candy-people. He, along with his shapeshifting dog, is an adventurer and hero so he carries a sword. When we approached a house that had spooky music and flashing lights my littlest was scared and stood at the edge of the driveway. I drew my sword and said to her, “You ready?” She got a determined look on her face, squinted her eyes and nodded her head once and ran to the front door. Any house from that point on that seemed scary, she would turn to me and say, “Get your sword daddy. Let’s do this!” and run for the front door. It was adorable.
I was surprised at how many people commented on my costume. I often remark on how I might be 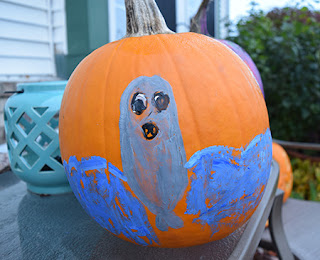 ruining my kids. My wife and I have some obscure tastes in movies, tv shows and music. Our kids in turn have some strange tastes in movies, tv shows and music. One of my favorite memories of my oldest was her singing along to the Pixies before she could even string together a simple sentence. Case in point, look at my oldest daughter’s pumpkin. At first glance it might appear to be some kind of ghost. Nope. It is a seal. Actually, it is a selkie. A selkie is a Scottish/Irish mythical creature. The girls have been watching Song of the Sea. It is a wonderful animated movie that is a little Wizard of Oz and alot Scottish folklore. The animation is amazing and unique. It is done by the same people that made Secret of the Kells. My oldest has been obsessed with it. She has moved on from Japanese folklore for the time being. She has been switching off between Song of the Sea and The Secret of Roan Inish. I’m thinking about doing a review of Song of the Sea but Kubo and the Two Strings is coming out soon so I think I might do a review of that first.

Anyway, Halloween was awesome. We all had a great time. I’m starting to get better at this whole hosting thing. In college my room mates would have dinner parties. I thought they were so cool. At first I would attend but I often felt out of place and awkward. I think I over think the whole hosting thing which never leads to anything good. The last few get-togethers I’ve thrown have gone well now, so maybe I’ll invite the new neighbors over… yeah we’ll see about that.