I finished this a couple of days ago. I didn’t want to just post some phone pics of it so it took a couple days to get the opportunity to take some nicer pictures. I had fun doing this one. Some parts were a little frustrating while others turned out really nice. 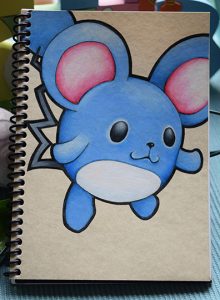 I mentioned in the previous post that I like doing pokemon drawings because they are simple designs that are easy to customize. I picked this guy because my colored pencil collection is still a bit weak. I have the blues all covered and that is the Marill’s main color. It was able to expand my greys and then start my reds. I am still getting a feel for the pencils and the larger areas of blue proved to be more of a challenge. I was anticipating this which was why I started with the snake-like Dratini. I am still thoroughly impressed with the quality of these pencils. Even in the places the drawing became overworked, I’m not entirely sure it was due to the pencils. I didn’t put much thought into the paper. I picked it because of the color, not the finish or coating. It most definitely is not a drawing paper. The finish is not coated but it is very smooth. There are a couple places that the paper just wouldn’t take the pencils right.
Perhaps I shouldn’t point out some of the problems but why not. I had two main problem areas in relation to the paper. Both of them happened on or around the left ear. The first problem I ran into was just below the ear. If you look at the bigger picture there is a darker patch just below the ear. I noticed the pencil wasn’t blending quite right so I tried building it up slowly but I still ended with a darker spot that refused to blend. A little later I was working on the ear when the light spot, close to the tail occurred. This was what tipped me off to the fact that it might be the paper. Even building up the base was difficult. It was impossible to do any blending at all so I tried my best to mask the problem and work around it. 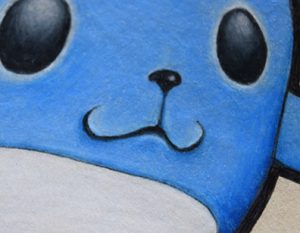 Another issue that arose was the fact that these pencils are so opaque. I actually love the fact that they are so opaque. One of the things I knew I wanted to add to the Marill was a cute little nose and a philtrum. When I drew the mouth I really liked the shape but the groove was slightly off. I tried to fix it when inking but there was still something that was slightly off. The philtrum was too abrupt. Using the opacity I was able to add some nuance to the area. I could not be happier with how it turned out. This is actually my favorite part of the drawing. This is why I wanted to take better pictures, so I could add a nice detail pic. The only problem was after I was done with the colors I had to go back over the dark ink lines to crispen them back up. Looking at this detail pic, I might have to go back and clean up the fine line around his white belly. 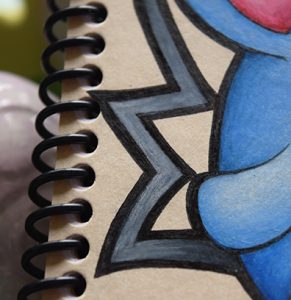 The other area that I really like is the tail. The tail was a bit of a happy accident. I picked up a black pencil and a couple dark grey pencils but they were so dark that it all ended up just looking black. I went back over adding highlights using white and then blending it in with the dark grey which ended up with what almost looks like paint. Once I went back over the black ink, it just emphasized the pencil strokes and textures. Now I’m wondering if I can build on this technique to add amazing textures to my next drawing. It could look really great as hair or fur on a wolf or something. One of the things I try to avoid when drawing with colored pencils is just laying down flat solid colors. There is a time and place for that kind of thing but I don’t think that is the best way to utilize colored pencils. I like to do solids and posterization when I’m painting because I think acrylic paint lends itself well to that but not colored pencils.

So there you have it. The Marill is complete. I’ve already started a new drawing but it is still in its very early stages. I will post some pics next week.