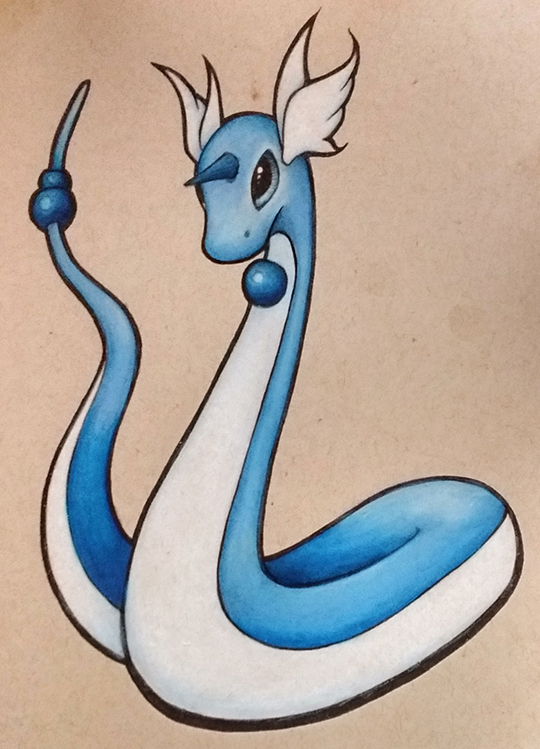 I have been coveting high-quality colored pencils for some time now. When I was in high school my teacher loaned me a set of colored pencils that were amazing and amazingly expensive. I used them over a break, probably Spring Break, but I can’t remember which now. Since using them I have always wanted a set. Every now and again I will be at the art supply store and I will eye those pencils but the basic set is about $150 and I cannot just drop that kind of dough on some pencils. I have a mortgage. Lo and behold, there is a store that sells them individually. Sure they are more expensive in the long run but this way I can slowly build a collection and if they are not as good as I remember I didn’t waste too much money. I started with blues. That is the other problem, I want ALL the spectrum. I want white, light blue, sky blue, cerulean blue, ultramarine blue, cobalt blue, blue and dark blue. That big set had maybe three of the above. So after a few weeks of buying one or two here and one or two there I finally completed my blues. 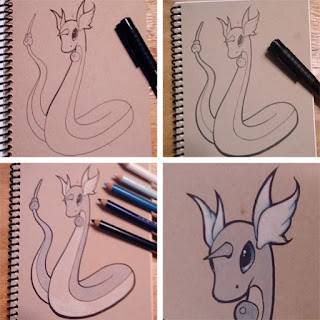 Now that I have the blues I wanted to do something simple but fun. Something I could experiment with and get a feel for how the pencils work and blend. So I started looking at Pokémon. Dragonairs are basically monotone blues with the nice darker beads so I could experiment with blending, both lights and darks. That and they are fairly simple so I could take my time and still probably finish it up over the weekend. The only problem being, Iron Fist was released on Netflix this weekend and I am going to spend some time watching that. Iron Fist had some really bad early reviews so this drawing might end up being the focus of the weekend.

I was able to get the inks done Saturday morning. The girls were in an artsy mood so I was able to get the inks and base coloring done while the youngest was working with Play Doh and the older was making masks. I brought home some glossy label stock that she was using for her masks. She tried using Crayola markers on it but they would just sit on the surface and smear without drying. She cleverly put Scotch Tape over the top sealing it while also making it look wet, almost like it trapped water droplets. It looks really interesting. I will try to take a picture. 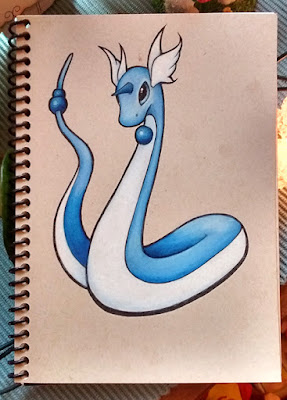 I have been wanting to work with white, which is why I put a few sheets of brown paper in my sketchbook. I started with the head wings(?) because they were small and I could get a feel for how the pencils blend and layer. A few seconds after setting in, I knew I was going to be buying more of these pencils. The pencils build and layer without getting over-worked. Crayola pencils are nice but you have to work very conservatively because they quickly become over-worked and muddy. I was worried about that happening on the dragon’s belly. I had to put down alot of white so I was afraid when I added the shading it would just get waxy and reject the darker pencils. I often have to scrape off Crayola pencils with an Exacto because they don’t always lay right. I have developed a feeling for when that is going to happen. While working with the Prismacolors I felt like that threshold was approaching but they continued to blend perfectly far past the point that others would have failed.

It almost felt like cheating. They blend so well. I was even able to go back in and add some highlights. On the tail where it curves around behind it, I was able to go in and add highlight to the bend. I was still super cautious, and probably could have pushed it a bit further but I’m still amazed at the quality of these pencils.

I am looking forward to buying and expanding my collection of pencils. I guess I should figure out what Pokémon I’m going to draw next so I know what colors to buy. I know nobody is reading this, I see the numbers, but if someone does stumble upon this and has a suggestion please let me know. Who knows maybe I’ll even send you the final drawing.