Home » Cypress Hill » Does it hold up… Cypress Hill
I am having a problem writing this because I have switched my opinion while writing. I put this album on for a run the other day and I was really disappointed. The album has its bright spots but for the most part it really doesn’t hold up. 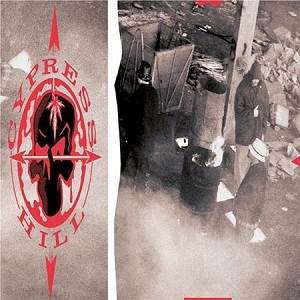 Then I put it on this morning to make sure it was fresh in my mind as I wrote this and I found myself liking it a lot more than I did the other night. B-Real is pretty great. His voice is unique and his rhyme scheme is wonderful. He has a uniqueness that stands out. When you hear him rap, you know it is him. DJ Muggs has always been an enigma to me. He is a hype-man with no hype. I suppose it would be too much to be like Flava Flav when your whole niche is being stoned. He definitely adds something but sometimes I wonder if it is anything worth while…
I started this post last week. I was conflicted. Like I said before, I listened to the album and came to the conclusion that it was bad and didn’t hold up, but then I listened to it again and thought maybe I was just in a bad headspace when I listened to it the first time. So I put this post on hold and went running again. I loaded up the album and went on a long run. It was a good run. One of my favorites where I loose myself and actually get lost. There is no feeling like that moment when you realize you have no idea where you are or how you are going to get home from there. Anyway, I listened to the album twice.
The album reminds me of high school. Hanging out at the Mall of America. Being a goof. I vaguely remember the political climate but didn’t much care. Basically we were all doomed. Gang violence was out of control and nobody was safe. I lived in a nice suburb and everyone knew it was only a matter of time before gang violence would strike. Just so we are clear, not one person I knew was involved with or effected by gang violence. No one. It is funny how things go in cycles. Just like music seems to recycle every 30 years I think the culture does as a whole. I often wonder if it has to do with the maturation of the populace. Especially with the internet, I wonder if people hit a certain age and start getting nostalgic. Like, “Hey I remember loving the crap out of He-Man,” so you go online and find a bunch of He-Man figures on Ebay. Then some marketing guy sees a report showing a bunch of internet activity for He-Man figures so they release and market new He-Man figures. They are bought up by nostalgic parents for their kids who then will relive the experience in 30 years with their own kids.
I was reading some music criticism that was talking about this cycle in music. A musician, such as Ringo Starr, grows up listening to his parents’ music. By listening to the music, he picks up bits and pieces that he likes and matures as an artist. Then when he has some clout and a chance to do something he comes up with Octopus’s Garden. It is a weird song in the context of Abby Road, but when comparing it to the music he grew up listening to it suddenly makes a lot more sense. I’m not saying Octopi… Wait what were we talking about?
Oh yeah. This album kinda stinks. While it has its moments it does not hold up. The stories he tells fall flat. The production is interesting but really just seems to be doing what Terminator X was doing with Public Enemy but not quite as well. It is an interesting snapshot of the culture at the time but it just seems stale.
Milwaukee Printing
Custom Calendars