Home » ...And Justice for All » Does it hold up? …And Justice for All
I’ve mentioned I am a runner. After a couple years my runs have gotten longer and while I have a playlist that I use for my fast run days, I have been listening to old albums that either I missed or that I used to love. Some of them hold up others do not. 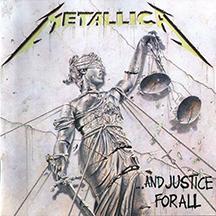 I have always loved music. My older cousin would make me mixed tapes of music, “I had to hear,” and when I visited him we would sit in his backyard with a boombox late at night trying to dial in New York radio stations so we could hear new hip hop music. I moved around quite a bit so friends came and went but my love of music was always strong. My middle school years were spent listing to metal. When I first heard Kill ‘Em All I was instantly hooked by the opening riff of “Jump in the Fire.”
…And Justice for All was one of the first new releases I looked forward to. I bought the cassette the day it came out. I think I wore that poor tape out. It was a big album for them too. They broke through to mainstream audiences and were even nominated for a Grammy. Now in my jaded mind I wonder if this was because they had compromised and “sold out.” I remember distinctly how disappointed I was when Metallica or The Black Album came out. The Black Album seemed to loose much of the complexity that older albums had. That in addition to the Napster incident totally turned me off of Metallica. Don’t get me wrong, I don’t think they were wrong about Napster, I just think Lars is a total ass and his self-important rants were too much for me.
So was …And Justice for All the start of the fall or was it their last good album? I put the CD on my iPod and went for a run.
Track 1: Blackened – The slow fade in of distorted guitars and then at the 35 second mark there is a split second of silence, almost too little to notice and everything hits at once. Then the driving guitar riff starts up, building to the snapping of the snare only to build more before settling into the first verse. James Hetfield’s voice is one of the driving things that made me a fan of Metallica. Ulrich’s drumming is spot on. He might be an asshole but he can drum like a madman. “See your mother, put to death. See your mother die.” Man that is some dark stuff. They seem to throw their all into the first song. All the changes in time signature, dark lyrics about the end of the world what more could you ask for?
Track 2: …And Justice for All –  It opens with the nice guitar opening. I think that this is one of the things that sets Metallica apart from other thrash metal bands. Iron Maiden employs this type of song opener where it contrasts the heavy sound that the song becomes but Metallica doesn’t go fully acoustic so it feels more cohesive while still giving the same contrast. This song gives Hammett a chance to show off some of his talent. I like how some of the riffs echo the intro to Blackened. This song also really shows how good the mix is. The bass drum has a nice punch that complements the higher guitar parts.
Track 3: Eye of the Beholder – Third song and they are already fading in again, but what they are fading into is what matters. The “jugga jug jug” sound that sums up the sound of metal so perfectly. The thing that really stands out in this song is Ulrich’s drumming. The guitar stays fairly static throughout the song but the drums have a subtlety that is easy to miss. An extra kick drum here, a faster time for one stanza, then back to the standard, then it backs off for Hammett’s solo. The song is so simple but it does a great job of setting up the next song.
Track 4: One – The song that changed everything. This could be what ruined Metallica. James Hetfield is perfection. He handles the lighter parts so well by not trying too hard. He sings a little more but adds a little growl to keep from becoming too sappy. I like how the song seems to reference their earlier work. It is a lot like Fade to Black without the 12 string. It is simpler than Fade to Black which is what makes me think that this was the beginning of the end. Much like how Under the Bridge’s success changed Red Hot Chili Peppers sound, I think this song’s success changed Metallica. Between this song’s success and the death of Cliff Burton it was downhill from here in my opinion. 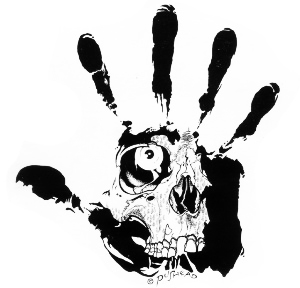 Track 5: Shortest Straw – Another solid metal tune. I always liked the solo in this one. I always imagined Kirk saying, “Ok this one is mine.” The little pause in the solo is so great.
Track 6: Harvester of Sorrow – Ok first of all, this is the best name for a song ever. The complexity of this song is really great. It changes three or four times before the first lyric. “Anger. Misery. You’ll suffer unto me.” This has always stood out as a political song that doesn’t come off as too heavy handed. I think it is because they keep the lyrics a bit vague, with exception of, “Land of the free.” This song reminds me a lot of One but the song has less of a contrast incorporating the undistorted guitar parts over the heavier guitars.
Track 7: The Frayed Ends of Sanity – The song that completely changed the way that I looked at the Wizard of OZ. Ok, that isn’t necessarily true but when I heard them use that chant it reinforced the sense of foreboding that I always felt during that seen in the Wizard of OZ. There was always something that I found unsettling about that scene. Anyway, the riff at the 4 minute mark is so great and it leads into a great solo. The solo isn’t as good as Shortest Straw but most of the guitar work in this song rises above most thrash songs.
Track 8: To Live is to Die – Filler. Ok it is good in that it shows off that they are actual musicians, but did they really need a 10 minute instrumental? It does have that little poem(?) but that just comes off as pretentious. Maybe it’s just me but it seems a little too “on the nose.”
Track 9: Dyers Eve – Boom. Just when you are thinking that you’ve had just about as much as you can take of the previous song this one starts without warning, and it rocks. The drums are relentless. I always wanted to see them play this live just to see if Lars could pull it off. The “Dear Mother, Dear Father…” is a great line. And the solo is great. Everyone is spot on in this song. The song is a great way to end the album.
The album totally holds up. I think that it is a really solid album. Even the songs that are fillers rock. While it isn’t their best album, I think that it isn’t given a fair shake being that it followed Master of Puppets. A lot changed for them as a band with this album. While I don’t think this album was bad, I can see how it lead to their fall, at least in my mind. I still check out their new stuff occasionally and it just doesn’t hold up to me. I watched their concert video with the kid running errands and while it wasn’t bad, it just didn’t do it for me any more. I don’t think they are bad I just feel like their best days are behind them.