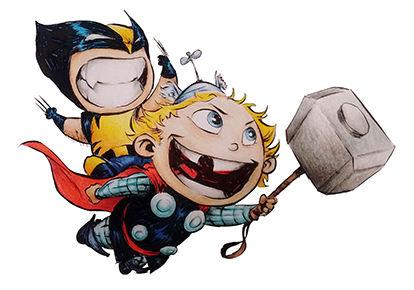 Professionally this has been a pretty good year. It has been incredibly challenging, but I’ve learned alot and it has been very rewarding. With the extra hours all of my free time has been dedicated to staying connected to family and making that time spent with them count. Unfortunately I have not been a very good friend. I have neglected most of my friends. When they have needed me over the past year I have tried to be there for them but I’m sure there have been times that I wasn’t.
One friendship in particular has probably suffered the worst. That person and his wife have become family friends. We have vacationed together and we have even attended comic book conventions in Chicago. He knows that one of my favorite comic book artists is Skottie Young. I found out about Skottie Young when he illustrated a Wizard of Oz mini-series. I met him at one of the first comic-cons I went to. He was new to comics so he didn’t have a line and I was able to talk to him for a little while. Skottie was incredibly gracious with his time talking about his work while signing the large stack of books I put in front of him. Since then he has grown in popularity. He has become well-known for his renderings of Marvel Super Heroes as children. It seems like every comic on the shelves has an alternate cover available by him.
Christmas has just passed and my wife and kids all got coloring books. One of the things we do on Saturday mornings is sit around the table and do arts and crafts. Really it is just an excuse to drink my coffee and do some drawing, but the kids like to do crafts and draw too, therefore, coloring books. I was a little disappointed that I didn’t have a coloring book but really I like to do my own drawings and I haven’t really seen any coloring books that interest me. 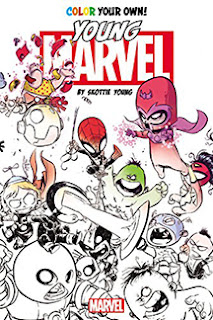 In preparation for Christmas, I took a couple of days off to get shopping and cleaning done and while out my friend called. I cut my shopping short and met him at my house. We sat around a while talking and then he gave me a Christmas gift. Turns out, Marvel released a coloring book of Skottie Young’s drawings. It was an amazing surprise. Have you ever been so surprised and happy that you literally do not know what to say? Here I had been feeling bad about how lousy I’ve been to all of my friends, but him in particular, when he shows up with what is an amazingly thoughtful gift. I try to be a good gift-giver. I try to get things for people that they would really like but either they wouldn’t buy for themselves or they didn’t know existed and he totally nailed it. He knows I love Skottie Young and while there are many comic book themed coloring books out there he chose my favorite artist and a good book to color while sitting around the table with the girls.

I love Christmas because of the extra time I get to spend with my family. Seeing the girls’ faces light up when they open their gifts and their excitement over the magic of Christmas. I cherish the time we spend together and this year I was able to experience a little more of that magic. I know it seems silly, but sometimes it is the littlest things that make the biggest impacts.
Milwaukee’s Best Printer
Online High-Quality Printing