Home » anklet » And an Anklet… 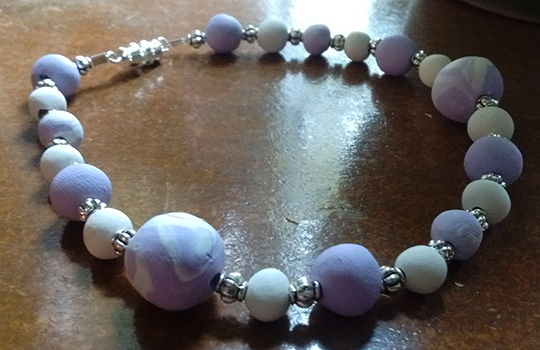 Last night we had some thunderstorms move through. I don’t know where my oldest picked it up but she has decided she is terrified by thunder and lightening. Lately I’ve been going for my nightly run and then coming home and listening to music while drawing or doing something creative. Last night I was listening to Ahmad Jamal while making a new anklet for my wife. She used to wear stuff like this all the time but most of them have broken or gotten lost. I made the beads out of Sculpey, if you look close you can see the occasional fingerprint. I was distracted, wearing headphones, looking down at the anklet when suddenly my oldest was standing next to me silently sobbing. Scared the living daylights out of me. I was lucky I didn’t drop the anklet and loose all the beads.
We talked for a little while and I showed her the anklet while making her a small snack to get her calmed down. The storms got louder so I had to pull out the couch-bed and we slept downstairs. I slept on one couch while she slept on the other. She wanted to sleep in the pullout with me until she remembered I snore… the one upside of snoring.
I do have sympathy for her. I grew up in Florida and there were serious storms there. Once, when I was pretty young, we lived near the beach and a hurricane hit the coast. Luckily it wasn’t very strong because I really wanted to go outside to ride my tricycle and when the rain let up that is exactly what I did. I went outside and started riding around the apartment complex. Almost immediately I noticed everything was really weird. It was dark, almost like dusk, and nobody was outside even though it was maybe 1 pm. Even as a 6 or 7 year old I was unsettled by the quiet darkness that surrounded me so I peddled my little butt home. Two things happened almost simultaneously as I walked in the front door. The first was my mom freaked out. She ran at me scooping me up and squeezing me in a tight hug while yelling at me. Then I remember the door slamming closed and rattling as the wind and rain started. My memory of how suddenly the rain and wind started up might have been warped by time but the fact that I went for a ride on my tricycle during the eye of a hurricane is completely true.
Another time I was at my Aunt’s house and there was yet another hurricane. She lived in a mobile home and the winds were so strong that the trailer was knocked off it’s foundation. That was the time that messed me up. I wasn’t until I was in college that I finally overcame my fear of storms. Now I don’t get the least bit nervous but I do remember the fear that I used to feel. The funny thing is that it wasn’t the thunder and lightning as much as the sound of the heavy rain pounding on the windows. The thunder was just a warning for what was to come.
Nevertheless, we survived the night. She still woke me up a couple times for snoring but everyone was happy and safe in the morning.
Milwaukee’s Best Printer
Online Print Excellence