I mentioned finishing up my Mario Brothers projects and I’ve started a new project involving cactuses and some public art but I haven’t been making much progress lately because I have been working on something else. I’ve been working on something for my wife and her family. It all started with a simple gift. Nothing special really, just dishtowels. My wife’s grandmother made a bunch of dishtowels. They were simple but they functioned wonderfully. They were lighter white fabric, about 3 ft by 3 ft and sewn around the edges. As an accent, she embroidered simple fruit designs. They are perfect and I use them everyday. My wife’s grandma passed away about 10 years ago. I still use the towels but they are starting to become worn and stained. They have become part of our everyday lives. They are always sitting on the counter covered in drying dishes or hanging from the refrigerator door.

I was looking at one as it hung from the refrigerator door, all stained and worn, when an idea hit me. Instead of packing it up in some box, never to be seen again I would do something else. I would try to make it something special. I gathered up all the remaining towels and went to work on my plan. 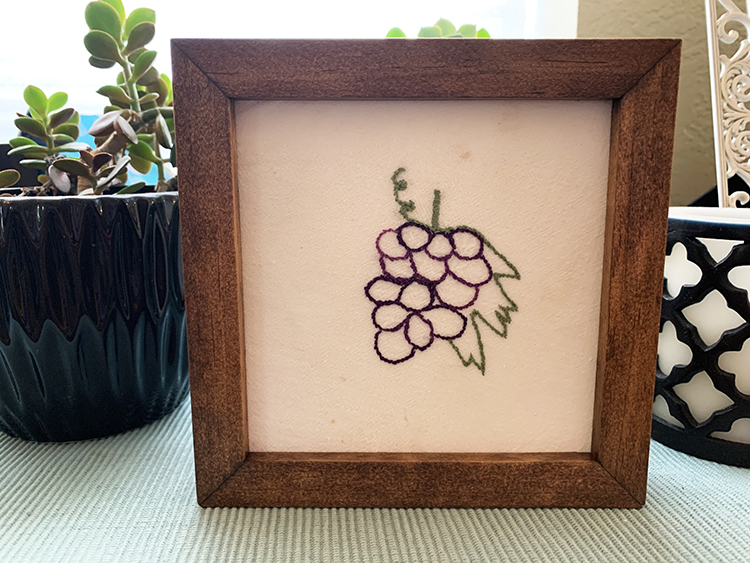 I’ve been making frames and in an attempt to get better I started making a bunch of frames. They were all stained the same and basically the same size but I wasn’t sure what to do with them. I haven’t quite mastered staining so they all appear a bit…rustic. That was limiting what I could use them for. I was planning on doing more forest drawings but I have been having a problem finding nice wood to draw on. that was when everything came together. 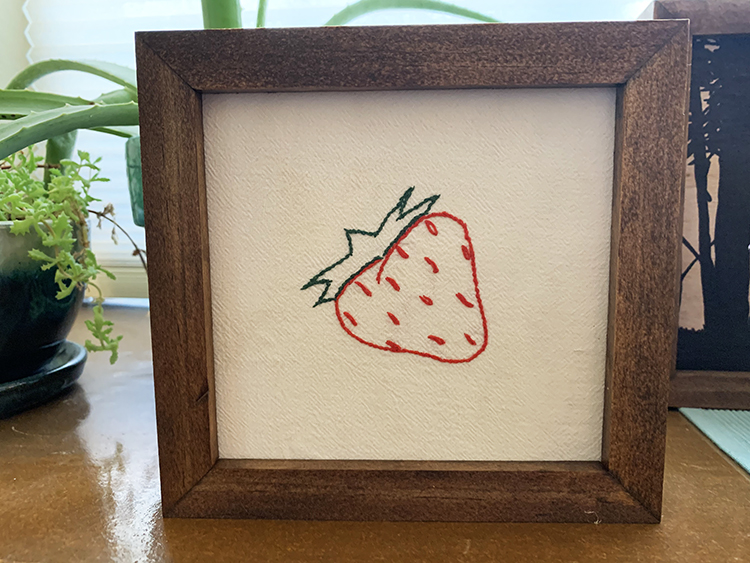 Within a few minutes I had put together my first framed dishtowel.  It was one of the first projects that actually turned out as I had envisioned it. I don’t know if that is because I’ve gotten better at crafting things or my personal expectations have lowered so I decided to stop at one. The problem is I have to cut up the old towels. They were 3 ft by 3 ft and the final size displayed in the frame is only about 5 by 5 inches. If it turned out my wife didn’t like them I would have just cut up a bunch of irreplaceable family history. So I took the sample to my wife for her reaction. 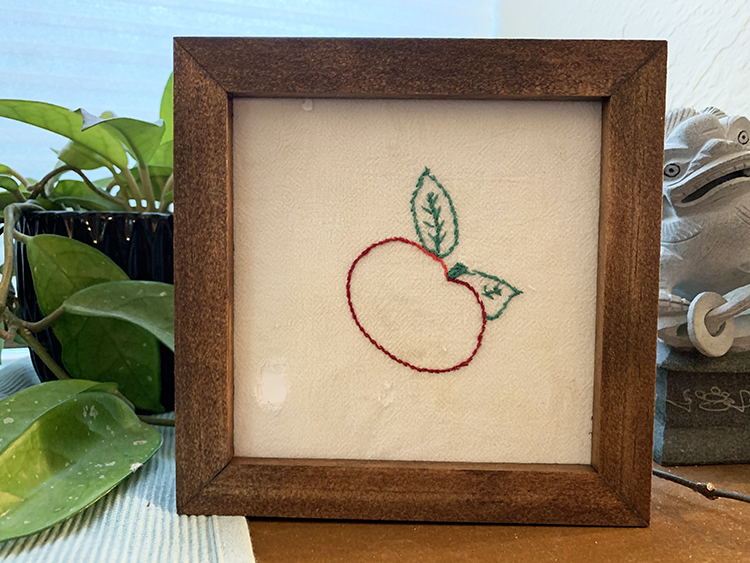 To say she liked it is an understatement. She loved it and immediately grabbed her iPad to FaceTime her mother. I made 3 more for us and I made another as a gift for my mother-in-law. My mother-in-law scheduled a trip to come see us that following weekend. She said it was because we left some things behind after our last trip to her house but the first thing she did when she got to our house was give me a huge hug and then she handed me a bag packed with embroidered handtowels. She had one she had picked out on top that she wanted in a frame so I had to get to work building and staining a frame in time for her to take it home with her at the end of the weekend.

We stayed up late playing cards, drinking and telling stories about Grandma. I got to hear some new ones along with the classics. My favorite being when she was a baby her parents put her to bed without cleaning all the ice cream off her. Rats snuck into her bed and nibbled all the skin of the tips of her toes. Times were different back then, sometimes you just lose some skin to the rats in the night. I can’t help but think of that story when I see the worn holes in the framed dishrags.